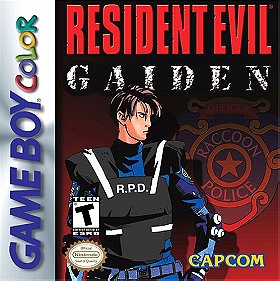 Using a combination of top down side-scrolling action and 1st person shooter, it is your job to get aboard the liner, currently floating in the Atlantic Ocean, destroy the weapon and find Leon. Along the way, you'll come across plenty of deadly undead enemies, similar to those found in the original Resident Evil series, while using a range of weapons and items found in the ship. ... (more) (less)
Manufacturer: Avalon Interactive
Release date: 14 December 2001
Number of discs: 1
EAN: 5028587070747
Tags: Horror (1), Resident Evil (1), Gameboy Color (1), Played Rom (1)
My tags:

smilethemime rated this 7/10 12 months ago

Rwkvel added this to wanted list 2 years, 2 months ago

patrician added this to owned list 2 years, 9 months ago

Gumtierl added this to wanted list 4 years, 5 months ago