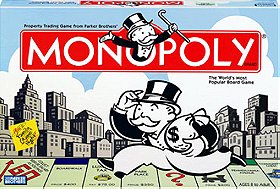 1 vote
View all Monopoly pictures (2 more)
Monopoly is an American-originated board game originally published by Parker Brothers. Subtitled "The Fast-Dealing Property Trading Game," the game is named after the economic concept of monopoly — the domination of a market by a single entity. It is currently produced by the United States game and toy company Hasbro. Players move around the game board buying or trading properties, developing their properties with houses and hotels, and collecting rent from their opponents, the ultimate goal being to drive them into bankruptcy.
Tags: Game (1), Board Game (1), Bankruptcy (1), Dice (1), Hasbro (1), Parker Brothers (1), Charles Darrow (1), Elizabeth Magie (1), The Fast Dealing Property Trading Game (1), Luxury Tax (1)
My tags:

santos11 added this to owned list 2 years, 7 months ago

Pacifista O added this to list 3 years, 3 months ago

psychofaerie added this to owned list 3 years, 11 months ago

Queen of Horror added this to a list 4 years, 1 month ago
Favorite Board Games! (17 toys items)

browser voted for an image 5 years ago

fall3n added this to owned list 6 years, 3 months ago