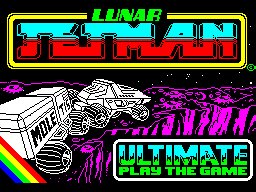 Lunar Jetman was Ultimate Play the Game's first game to require 48K of RAM - all previous games had run on unexpanded 16K models. The game was written by Chris Stamper with graphics designed by Tim Stamper. The game was followed by a third instalment, Solar Jetman: Hunt for the Golden Warpship, released for the NES in 1990. The game was met with critical acclaim upon release, with praise mostly directed at its addictive gameplay and wide range of colours. It was later included in Rare's 2015 Xbox One retrospective compilation, Rare Replay. ... (more) (less)
Tags: Adventure (1), 1983 (1), Arcade (1)
My tags:

Sndi added this to a list 5 years, 1 month ago
My Offline Games History (208 games items)