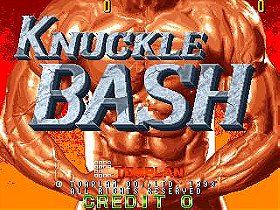 José Lopes added this to list 2 years, 11 months ago

ape added this to a list 3 years, 1 month ago

" Beat September 15, 2017 Being a huge professional wrestling fan, as well as a Final Fight fan, this was a very pleasant surprise to find. Knuckle Bash is basically a mix between a fighting game and a side-scrolling beat-em-up, but all of the characters are professional wrestlers. The controls aren't smooth, and the action isn't always exciting, but I enjoyed myself enough to see the game through to the end. The ability to "recruit" some of your opponents as you go, increasing your selection o"