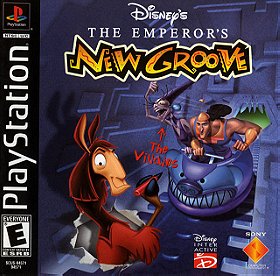 6 votes
Video Games I enjoyed during my childhood (245 items)
list by AVPGuyver21
Published 8 years, 4 months ago

View all The Emperor's New Groove pictures
Based on Disney's animated feature film, players assume the role of Kuzco, a young Incan ruler who is turned into a llama by the evil Yzma. There are eight levels to complete before a showdown with Yzma back at the castle. To complete the levels, players must jump gaps, board moving platforms, break items and barriers, switch triggers and open doors. Yzma's minions will be after you; defeat them by running, jumping, charging, and even spitting. Players can collect red and gold hearts, 100 Aztec coins, and water jugs along their journey.
Manufacturer: Sony
Release date: 16 February 2001
Number of discs: 1
EAN: 0711719252221
My tags: