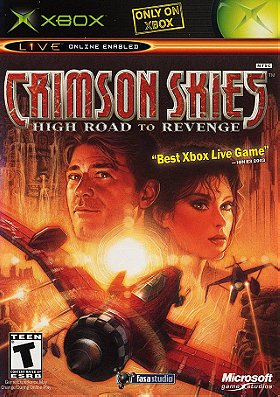 2 votes
Games I have played (514 items)
list by XXII
Published 8 years, 7 months ago

This title was originally announced in March 2002 for a fall release date of that year, but was not released until October 2003. The delay was partly due to Microsoft deciding not to use any of the development team from the original PC game (Zipper Interactive), and starting from scratch with a new team.

Nathan Zachary returned as the hero in Crimson Skies: High Road to Revenge. After an opening cutscene in which Zachary steals back the plane he lost in a drunken poker game the previous evening, the game gets under way.

This game retained some of the atmosphere of the series, but designers attempted to make more an arcade-style game, with power-ups and CGI cut scenes. The planes and weapons available are much less customizable than in its predecessors, but the split-screen, system-link and Xbox Live modes provided many more game type options. Up to 16 players can compete in six different games on five different multiplayer maps. The game also has support for downloadable content, which has included four new planes, two new maps and two new gametypes.

The game's soundtrack was also released separately, featuring 54 tracks from composer Stan LePard on CD, and a bonus DVD with Dolby Digital 5.1 Surround mixes of the game trailer and two cues from the soundtrack.