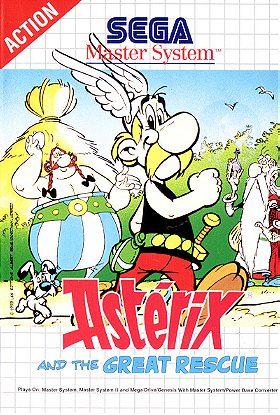 To rescue their friends Getafix and Dogmatix from the Romans, Asterix and Obelix must make their way through five levels of platforming action, encompassing Gaul, a Roman encampment, the forest, a Roman galley and the city of Rome itself, fighting animals and Roman soldiers. Each level consists of six smaller stages, with the final stage being a boss fight.

During the levels, players can switch between Asterix and Obelix at any time. Both friends have slightly different abilities: Asterix moves faster and can jump higher and is the only one who can crouch to get into crawl spaces. Obelix can push heavy objects out of the way, has a more powerful punch than Asterix and can jump on top of enemies to destroy them or to bounce off of them. He can also use his punches and bouncy jumps to destroy brick barriers. Only Asterix can use the magic potions that can be found in the levels, of which there are four varieties: levitation potions allowing him to fly, bomb potions giving him projectiles to throw, cloud potions allowing him to create platforms in mid-air, and a disguise potion that allows him to pass by any enemy undetected. The only special ability Obelix can use is his mega-punch: more powerful than a regular punch, it takes some time to recharge after use.

Besides the potions, other pick-ups include coins and money bags for points, chickens and chalices as health power-ups, a sickle for temporary invisibility, the Mega symbol for temporary super-strength and a red heart for an extra life. The game features a password system that allows restarting from any of the five main levels. ... (more) (less)
My tags:

Seinfeld posted a image 10 months ago