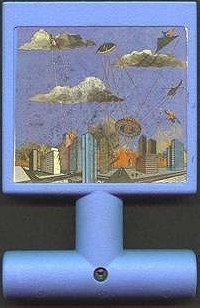 View all Air Raid pictures
Air Raid, not to be confused with Air Raiders or River Raid, is considered to be the rarest game released for the Atari 2600. It was the only game released by Men-A-Vision and had an extremely limited distribution. Its cartridge is a blue T-handle design with a picture of flying saucers attacking a futuristic city. It is not uncommon for the game to sell in the thousands of dollars when listed on eBay. On April 10th 2010 the only complete game (cartridge and box) known to still exist sold for $31,600.
Tags: Space (1), Rare (1), Atari 2600 (1)
My tags:

Hussam Khalil added this to list 1 year, 6 months ago