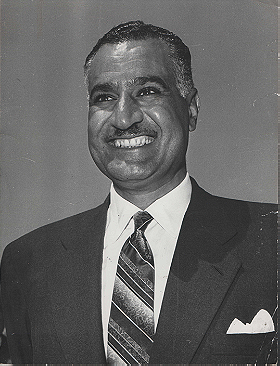 Nasser's popularity in Egypt and the Arab world skyrocketed after his nationalization of the Suez Canal and his political victory in the subsequent Suez Crisis. Calls for pan-Arab unity under his leadership increased, culminating with the formation of the United Arab Republic with Syria (1958–1961). In 1962, Nasser began a series of major socialist measures and modernization reforms in Egypt. Despite setbacks to his pan-Arabist cause, by 1963 Nasser's supporters gained power in several Arab countries, but he became embroiled in the North Yemen Civil War. He began his second presidential term in March 1965 after his political opponents were banned from running. Following Egypt's defeat by Israel in the 1967 Six-Day War, Nasser resigned, but he returned to office after popular demonstrations called for his reinstatement. By 1968, Nasser had appointed himself prime minister, launched the War of Attrition to regain lost territory, began a process of depoliticizing the military, and issued a set of political liberalization reforms. After the conclusion of the 1970 Arab League summit, Nasser suffered a heart attack and died. His funeral in Cairo drew five million mourners and an outpouring of grief across the Arab world.

Nasser remains an iconic figure in the Arab world, particularly for his strides towards social justice and Arab unity, modernization policies, and anti-imperialist efforts. His presidency also encouraged and coincided with an Egyptian cultural boom, and launched large industrial projects, including the Aswan Dam and Helwan City. Nasser's detractors criticize his authoritarianism, his human rights violations and his dominance of military over civil institutions, establishing a pattern of military and dictatorial rule in Egypt. ... (more) (less)
My tags:

1. The Philosophy of the Revolution (Economica Books)

1. The Philosophy of the Revolution (Economica Books)