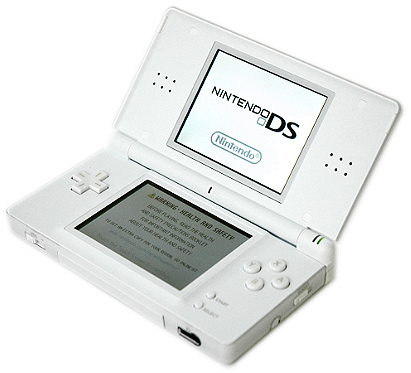 1 vote
View all Nintendo DS Lite pictures
The Nintendo DS Lite is a dual-screen handheld game console developed and manufactured by Nintendo. It is a slimmer, brighter, and more lightweight redesign of the original Nintendo DS. It was announced on January 26, 2006, more than a month before its initial release in Japan on March 2, 2006 due to overwhelming demand for the original model. It has been released in Australia, North America, Europe, New Zealand, Singapore, and defined regions in South America, the Middle East, and East Asia. As of December 31, 2009, shipments of the DS Lite have reached 89.19 million units worldwide, according to Nintendo.

psychofaerie added this to owned list 5 months, 1 week ago

Ronald VR added this to owned list 3 years, 7 months ago

Rylvan voted for an image 4 years, 9 months ago

Rylvan added this to owned list 4 years, 9 months ago

Emma Penny added this to wanted list 5 years, 1 month ago