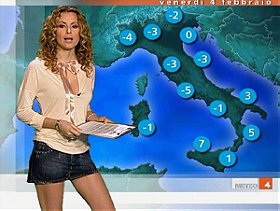 Gabriela Grechi started out on Italian television on the daily magazine-styled program Orario Continuato for Telelombardia in 1999. She soon moved on to Italia 1's Vipere show with cohost Valerio Staffelli, and then briefly appeared on OK during the 2001-02 season. She worked next as a sports commentator for Novastadio, which aired Sundays on Telenova Lombard, followed by a gig on TV Odeon's TG Rosa.

During the summer of 2003, Silvio Berlusconi's mighty Mediaset broadcasting network was interested in hiring Gabriela Grechi as its new presenter for Channel 5, but that gig eventually went to Lisa Gritti.

In September 2004, Gabriela Grechi appeared on the program Melaverde, and also debuted as the TG4 weather girl. Millions of male viewers got into the habit of tuning in to watch her forecasts at 6:55 each night, thanks to her preference for skimpy outfits. Since then, she's become a familiar face popping up in various TV ads, as well as in the series Casa Vianello, Finalmente soli and O la va o la spacca.

forzaitalia rated this 10/10 7 months ago

silvioberlusco rated this 10/10 9 months ago

italianpeople rated this 10/10 11 months ago

thenerdmafia voted for an image 1 year ago

Zeke21 voted for an image 2 years, 6 months ago

parryj voted for an image 3 years ago