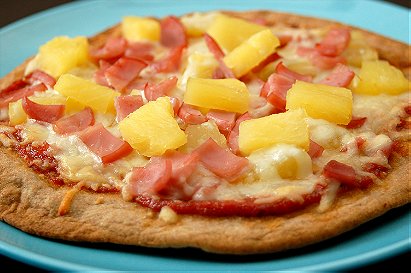 1 vote
View all Hawaiian Pizza pictures (12 more)
Hawaiian pizza is a pizza that usually consists of a cheese and tomato base with pieces of ham and pineapple.

Often versions will have mixed peppers, mushrooms and bacon. Another variety consists of pineapple and Canadian bacon.

It is the most popular pizza in Australia, accounting for 15% of pizza sales.

Despite its name, Hawaiian pizza is not a Hawaiian invention. Sam Panopoulos claims that he created the first Hawaiian pizza at the Satellite Restaurant in Chatham, Ontario, Canada in 1962. A co-owner of the Satellite Restaurant at that time - along with his brother, Nick Panopoulos. The brothers would later build off of the popularity of the Hawaiian Pizza and begin serving their next creation - the Hawaiian Burger.

psychofaerie added this to Liked list 3 years, 1 month ago