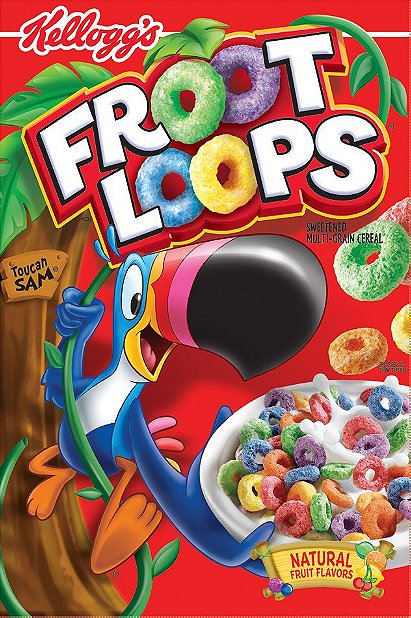 View all Froot Loops pictures (2 more)
What do a golf equipment manufacturer and a cereal company have in common? Toucans as mascots!

Toucan Golf Inc. registered its “Lady Golfbird” mascot in 1994 and likely didn’t expect a cereal giant to be knocking at its door. However, in 2003, Kellogg’s took to suing the company.

They ultimately lost the suit. The judge decided, “TGI’s use of the word mark ‘Toucan Gold’ does not create a likelihood of confusion among consumers, principally because TGI’s use of its mark is in an industry far removed from that of Kellogg. Also, TGI’s toucan logo, as a realistic toucan design, does not create a likelihood of confusion with Kellogg’s more cartoonish ‘Toucan Sam’ designs.”

Toucan Sam has other another rival as well with the mascot for the Maya Archaeology Initiative. A lawyer from Kellogg’s sent a letter to the small non-profit looking for a settlement so that the group has limited use of their logo. After much arguing, eventually the two groups came together in 2011 to form a charitable partnership.

foodcarnivore rated this 5/10 9 months, 3 weeks ago

psychofaerie added this to Liked list 4 years, 1 month ago