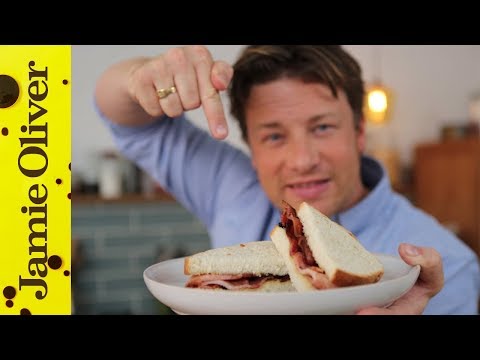 1 vote
View all Bacon Butty (Bacon Sandwich) pictures (3 more)
A bacon sandwich (also known in parts of the United Kingdom and New Zealand as a bacon butty or bacon sarnie, in Ireland as a rasher sandwich and as a bacon sanger in Australia and parts of Scotland) is a sandwich of cooked bacon between bread that is usually spread with butter, and may be seasoned with ketchup or brown sauce. It is generally served hot. The BLT is a popular variant of the bacon sandwich with the additional ingredients of lettuce and tomato, but served cold.

Bacon sandwiches are an all-day favourite throughout the United Kingdom. They are often served in greasy spoons, and are anecdotally recommended as a hangover cure. Australian hamburger shops sell a bacon sandwich, which is made much like a traditional Australian hamburger with fried bacon, fried onions, lettuce, tomato, tinned beetroot and barbecue sauce or tomato sauce. In some establishments the sandwich will be made from bread toasted on only one side, while other establishments serve it on the same roll as is used for hamburgers. In Toronto, Canada, peameal bacon served on a kaiser roll is a popular version of the sandwich.

unicornsugar added this to a list 1 year ago
Food: Sandwiches (12 food items)

psychofaerie added this to Liked list 1 year, 3 months ago

Rylvan added this to Liked list 2 years, 11 months ago