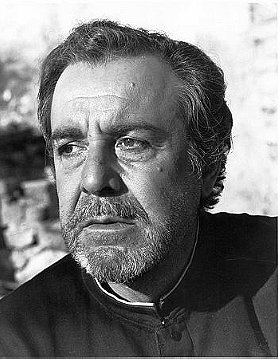 In 1960 Rey married the Argentinian actress Mabel Karr. In 1992 he became chairman of the Spanish Movie Arts and Sciences Academy. He died from cancer in Madrid in 1994. In 1936, Rey began his career in movies as an extra, sometimes even getting credited. It was then that he chose his stage name, Fernando Rey. He kept his first name, but took his mother's second surname, Rey, a short surname with a clear meaning (Rey is Spanish for King).

In 1944, his first speaking role was the Duke of Alba in José López Rubio's Eugenia de Montijo. Four years later, he acted the part of Felipe I el Hermoso, King of Spain, in the Spanish cinema blockbuster Locura de amor.

This was the start of a prolific career in movies (he played in around two hundred films), radio, theater and television. Rey was also a great dubbing actor in Spanish television. His voice was considered intense and personal, and he became the narrator of important Spanish movies like Luis García Berlanga's Bienvenido Mr. Marshall (1953), Ladislao Vajda's Marcelino Pan y Vino (1955), and even the 1992 re-dubbed version of Orson Welles' Don Quixote. In fact, Rey acted in four different film versions of Don Quixote in different roles, if one counts the Welles version (for which Rey supplied offscreen narration in the final scene).

His brilliant performance in the role of a demotivated and doubtful actor in Juan Antonio Bardem's Cómicos (1954), while showing him for the first time in a successful lead part, paradoxically, as he saw himself as the real incarnation of the role, plunged him in a professional depression, of which he did not emerge until his collaboration with Luis Buñuel several years later. However, in the short term, Buñuel's disconcerting public remark on Rey's performance in other Bardem's film, Sonatas (1959), I love how this actor plays a corpse, could only increase Rey's apprehensions; but anyway Rey became eventually Buñuel's preferred actor and closest friend.
International
Rey's first international performance was in The Night Heaven Fell (Les bijoutiers du claire de lune) a 1958 French-Italian film directed by Roger Vadim, where he shared cast with Stephen Boyd, Marina Vlady and the then young French sex symbol Brigitte Bardot.

In 1961 Rey played in the very first Spaghetti-western, The Savage Guns, and along that decade appeared in some other movies of this genre, including the interesting political The Price of Power (1969) and two sequels of The Magnificent Seven, namely Return of the Seven (1966) and Guns of the Magnificent Seven (1969).

It was his work with Orson Welles and Luis Buñuel during the 1960s and 1970s that made Rey internationally famous; becoming indeed the first international Spanish actor. Rey starred in Buñuel's Viridiana (1961), Tristana (1970), Le charme discret de la bourgeoisie (The Discreet Charm of the Bourgeoisie) (1972)—a complex movie which received the 1972 Academy Award for Best Foreign Language Film—and That Obscure Object of Desire (1977). He also played a role in Welles's Chimes at Midnight (1966).

Rey played very successfully the French villain Alain Charnier in William Friedkin's The French Connection (1971). Initially, Friedkin intended to cast Francisco Rabal as Charnier, but could not remember his name: he only knew it was a Spanish actor. Rey was hired before Friedkin could see him. Rey did not speak French and his English was not perfect, but Friedkin discovered that Rabal spoke neither French nor English, and opted to keep Rey, who reprised the role in the less successful 1975 sequel, French Connection II.

Along 70s and 80s Rey played in many international coproductions of the most heterogeneous film genres; among them, to name only a few, Lewis Gilbert's The Adventurers (1970), Mauro Bolognini's Fatti di gente per bene/Drama of the Rich (1974), Robert Altman's Quintet (1979), and Frank Perry's Monsignor (1982). A Rey's great success in that years was Elisa, vida mía, a 1977 Spanish drama film written and directed by Carlos Saura.
Back In Spain
In later years Rey worked preferently in Spain, with successes as Francisco Regueiro's Padre Nuestro (1984), José Luis Cuerda's El bosque animado (1987) or Jaime de Armiñán's Al otro lado del túnel (1992), and above all his incarnation of Don Quixote, alongside Alfredo Landa as Sancho Panza, in the memorable Manuel Gutiérrez Aragón's El Quijote de Miguel de Cervantes (1991) for the Spanish National TV.

His last appearance in the screens was in a supporting role in the Spanish black comedy El cianuro ... ¿sólo o con leche? (Cyanide ... pure or with milk?) (1994).
Awards
In 1971 Fernando Rey won the best actor award in the San Sebastián International Film Festival, for his performace in Rafael Gil's La duda, based, like Viridiana and Tristana, in a novel by Benito Pérez Galdós.

Another of the successes of Rey-Buñuel's tandem was That Obscure Object of Desire (1977), nominated for another Academy Award for Best Foreign Language Film. It was also nominated for a Golden Globe in the same category, though the movie failed to win either. Rey's voice had to be dubbed by Michel Piccoli.

In Lina Wertmüller's Academy Award-nominated film, Seven Beauties (1975), Rey played the role of Pedro the anarchist who, as a friend of the protagonist and fellow prisoner, Pasqualino Settebellezze, chooses a gruesome suicide rather than spend another day in a Nazi concentration camp.

shotswerefired voted for an image 1 year, 6 months ago

Leo added this to a list 3 years, 7 months ago