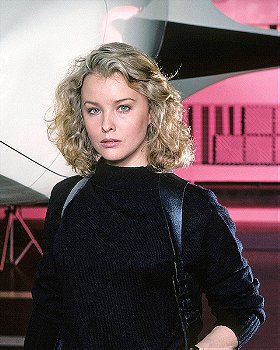 Early life
Grant was born in St. Clair Shores, Michigan. Her father was a police officer in her home town. She is a 1975 graduate of Lake Shore High School.

Career
Her first television role was on the TV series The Greatest American Hero, in which she appeared as Rhonda Blake, one of the students of main character Ralph Hinkley (William Katt). Her best-known role came in 1983 as Juliet Parrish in the science fiction mini-series V, the 1984 sequel V: The Final Battle and V: The Series from 1984 to 1985. Her film credits include The January Man (1989), Internal Affairs (1990), Drive Me Crazy (1999), Omen IV: The Awakening (1991) and Public Affairs (2017).

She has also appeared on shows starring Stephen Collins: the TV series version of Tales of the Gold Monkey, and 7th Heaven. She guest-starred as Abigail "Abby" Morris in the 7th Heaven episode "What Will People Say?" which first aired on November 11, 1996.

Grant starred on Broadway as vocally challenged Lina Lamont in the 1985 stage adaptation of Singin' in the Rain, which won her the Theatre World Award and a Drama Desk Award nomination as Outstanding Featured Actress in a Musical. In director Jerry Zaks' 1986 Lincoln Center-to-Broadway revival of John Guare's The House of Blue Leaves, Grant played the deaf Corinna Stroller, following Julie Hagerty and Patricia Clarkson in the role.[citation needed]

Grant has made guest appearances in TV shows like The Incredible Hulk, the Voyagers! pilot episode as Mary Murphy, Hardcastle and McCormick, Time of Your Life and Tales From the Crypt. She appeared on the show State of Grace from 2001 to 2002 as Tattie McKee.

Personal life
Grant married actor Stephen Collins in April 1985 in New York City. They have a daughter, Kate (born in 1989). Grant met Collins during production of Tales of the Gold Monkey in the early 1980s.

jemate voted for 6 images [View All] 3 months, 2 weeks ago

dvirgueza voted for an image 3 years, 8 months ago