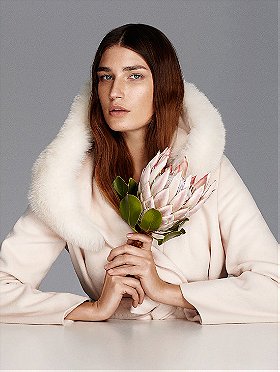 Volodina's modeling career began in 1998 when she attended an open call at a Russian casting agency. Although she didn't win, she was invited to take part in a Parisian modeling agency in 2000. Soon after, she was sent to Paris, where Volodina began to establish her career. Increased attention came in 2002 when fashion photographer Steven Meisel featured her in Italian Vogue. That same year, Volodina took part in a Gucci ad campaign alongside fellow Russian Natalia Vodianova and opened and closed the Gucci fall/winter 2002 show in Milan.

Volodina was planned to be the newest face of J'adore Dior instead they stayed with Carmen Kass, Volodina signed with Yves Saint Laurent cosmetics that same year. Valentino chose her as the face of his fragrance Valentino V. Volodina is also the face of the underwear brand Eres. She appeared in the 2005 Pirelli Calendar alongside Julia Stegner and Adriana Lima.

In one of the interviews for Marie Claire Russia, Volodina said she was studying interior design in Paris, where she lived at that time. Eugenia's most recent work includes Elle Spain and Harper's Bazaar Ukraine and Numero Russia covers, participation in Ulyana Sergeenko's Haute Couture Spring 2014 show and advertising campaign for Irfe.

matt voted for an image 5 months, 2 weeks ago

matt added this to a list 5 months, 2 weeks ago
My Favourite model (80 beauty items)

matt voted for an image 5 months, 3 weeks ago

Oligarque voted for 5 images 8 months ago

Ukraine Amie Russie voted for an image 8 months, 1 week ago

Top Model voted for an image 8 months, 2 weeks ago