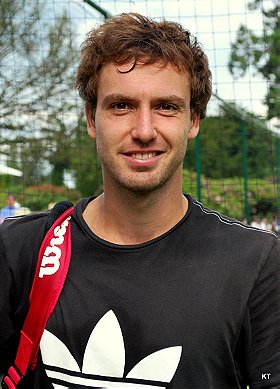 Gulbis' professional training in tennis began at the age of 12, when he was enrolled at the Niki Pilić Tennis Academy in Germany. Beginning after Wimbledon 2011, Gulbis was coached by Austrian Gunter Bresnik, until his departure the day before the 2016 French Open. Previously, he was coached by Guillermo Cañas, and before that by Hernán Gumy (who before that was Marat Safin's coach), but their partnership ended due to Gumy's schedule; during that time, Darren Cahill served as Gulbis' consultant for several tournaments. Before Gumy, Ernests was coached by Karl Heinz Wetter and subsequently Nikola Pilić, the former professional Croatian tennis player and Croatian and German Davis Cup captain. ... (more) (less)
Tags: Tennis (1), ATP (1)
My tags: