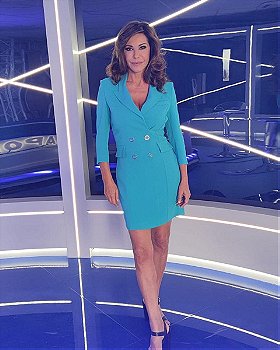 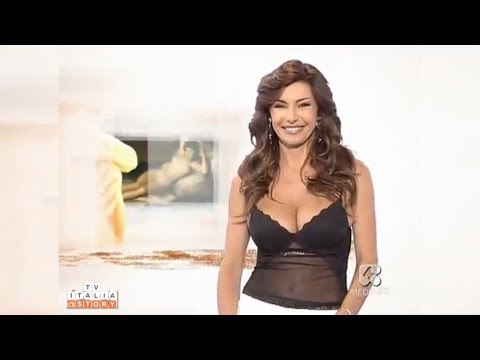 After making the photomodel debut on television, she introduced the Milan-Inter Sports Program in 1986 . Participated as an actress in Licia dolce Licia series and then took part in Rai 2 at the Variety account on you. In 1989 she collaborated with Telenova. In 1990 she became the official announcer of Network 4, performing occasionally ads for Channel 5 and Italy 1. Over the next few years she has conducted Top Twenty and Unmania on Italy 1, the announcements of The Beautiful On Network 4, and the 4th Afternoon Movie Network Programs, Special Affects, Who Has He Saw Me?, Love and fantasy dance with Al Bano. In 1999 is called to replace interim Iva Zanicchi to Ok, the price is right!.


In 2000 she performed Saturday's Vip, gossip program and in 2001 she participated in the Merry Christmas movie by Neri Parenti as an actress. In 2002-2003 she made a short (and unhappy) bracket at Rai Due at the Paolo Limiti Show (period in which he left Beneteau Massena the role of announcer of Network 4 to resume it immediately after the end of the " ) and then shortly after the beginning of his participation in the program just mentioned, in 2002 she was 37 years old , for the 2003 calendar of the Monthly Capital photographed by Bruno Bisang (the calendar requested a reprint and printed 300,000 copies).

After returning to Mediaset , in 2003 he conducted Naples Festival on Network 4, so he conducted Palermo, Fashion Show in 2003 - 2004 . He has been conducting, from 2004 onwards, love and fashion show every summer. In 2005 , he first performed Strangore , after the death of the creator Alberto Castagna , then Circus of the Summer and finally Four-legged Stars . In 2007 he conducts If ... in the first night on Network 4 . In 2009 it ended definitively after 4 consecutive annual editions of the Stranamore conduction.

In 2010, after 5 consecutive annual editions, she finished her conducting for Miss Padania at the second night on Network 4 . On Tuesday, May 10, 2011 , Rete 4 conducts the pilot episode of the Italian weddings container, but finds a poor listening success. From May 30, 2011, it takes 5 minutes to ... Wellbeing at 11.20 am Monday to Friday for a few months on Network 4 . From Monday, June 13, 2011 leads the first night on Network 4 Wellness - The portrait of health , television program that after the first two bets moves on Sunday afternoon at about 4:45 pm: after playing in the sitcom So all fans during the autumn 2011 on Italy 1 , conducted from January 16 to February 24, 2012 Wellbeing - The health portrait in the form of a daily strip of 30 minutes from Monday to Friday at 11.00 on Network 4 . In autumn 2012 , Folliero lands on the Mediaset La5 digital terrestrial network as it becomes one of the main conductors of that digital network (a role that from the summer 2013 shares with Silvia Toffanin and Alessia Marcuzzi ); exactly on La5 Folliero has conducted the Hollyfood programs - The appetite is watching (from Monday to Friday at 6:45 pm on November 5, 2012 or 15 episodes) and The Best of Me (aired on May 28, 2013) for a few weeks). From November 16, 2013, he has been conducting a weekly Wellness Academy program on Network 4 for a few weeks on Saturday morning. From February 17, 2014, she leads the program. Do you know what you eat? in the form of a daily strip in the morning of Network 4. Since November 8, 2015 , La5 has been the talent show between Dream and Reality.

Since May 2016, with the cancellation of the figure of the "Signora Buonasera" by Rai, is the only announcer in activity on Italian television. Folliero is also the only advertiser to have advertised on all three of the major Mediaset networks.

LGBT voted for an image 1 week, 3 days ago

komutanlogar56 voted for an image 2 months ago

looksharp voted for an image 2 months ago

nuscreen2016 voted for 3 images 2 months ago

Maria Farioli voted for an image 2 months, 2 weeks ago

Maudea96 added this to a list 2 months, 3 weeks ago
Italian women (287 person items)

shotswerefired added this to a list 2 months, 4 weeks ago
Italian Bombshells (89 beauty items)

Gav added this to a list 3 months, 1 week ago
Italian beauties (38 beauty items)

Silvio Berlusconi voted for 20 images [View All] 5 months, 3 weeks ago

Palermo Sicily voted for an image 6 months, 2 weeks ago

La dolce vita sexy voted for an image 7 months ago

Satrapo posted a image 7 months ago

Sanpellegrino voted for 20 images [View All] 7 months, 2 weeks ago

Citizen Connor voted for 9 images [View All] 8 months, 3 weeks ago