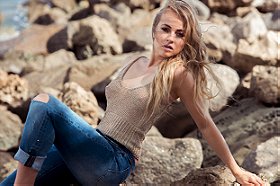 Ellen's career has seen to conquer the 4 industries of film, television, theatre and modeling, not only in her native Russia but also in the UK and now the United States. Elena trained at the world renowned Chekhov Moscow Arts theatre school where she truly honed her craft, becoming a recognizable figure in the Moscow arts world.

After relocating to the UK, she received rave reviews for her performance as Phoebe in The Catcher in the Rye at the Edinburgh Fringe festival.

She is best known for her work in Poor Nastya and Brigada. Upon arriving in America she landed the lead role of Tatiana in the series "Gold Diggers". She was also featured in L’Officiel French magazine. ... (more) (less)
Tags: Russian (1), Russia (1)
My tags:

1. Woman on the Edge

1. Woman on the Edge

1. Law of the Lawless

2. Law of the Lawless

djjetz added this to a list 5 months, 4 weeks ago
RUSSIA'S HOTTEST (294 beauty items)

Henny voted for 6 images [View All] 12 months ago

SomeBloke voted for an image 1 year, 7 months ago

Stepan_Kant added this to a list 1 year, 9 months ago
russian girls (296 person items)