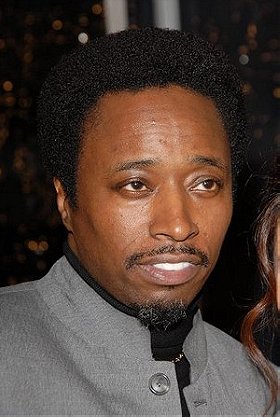 In 2002, Eddie co-starred opposite Denzel Washington in John Q; won critical acclaim as Antoine, the Gap-wearing, Friends-watching black man, in Undercover Brother and starred in the high school comedy The New Guy. Previously, he worked with director George Gallo in the mistaken-identity comedy Double Take, starring with Orlando Jones. His many other film credits include Deuce Bigelow: Male Gigolo, Picking Up the Pieces, Foolish, Armageddon, Meteor Man and Jason's Lyric. In addition, producer David Permut has acquired the rights to the life story of legendary entertainer Sammy Davis Jr. and Eddie is set to star as Sammy. On television, Griffin was the star of UPN's hit comedy series Malcolm & Eddie, for which he was nominated for an NAACP Image Award for Best Actor in a Comedy Series. He also wrote and directed four episodes of the sitcom, one of which starred his comedy mentor, Richard Pryor. Griffin has also been seen on the HBO specials Voodoo Child, the Cable Ace-nominated One Night Stand and Def Comedy Jam. ... (more) (less)
Tags: Actor (2), Comedy (1), Black (1), Male (1)
My tags:

create voted for an image 2 years, 7 months ago

PCA added this to a list 3 years, 1 month ago
Comediantes/comedians. (61 funny items)

Smiler1 added this to a list 4 years, 10 months ago

Smiler1 added this to a list 5 years, 5 months ago
All time comedians I find funny (29 person items)

Smiler1 added this to a list 5 years, 5 months ago
Actors I like that aren't my favorite actors (60 person items)