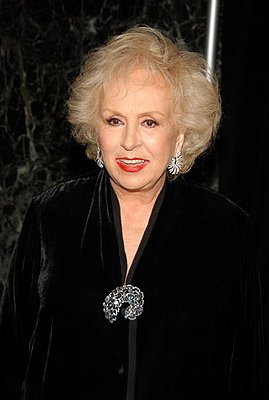 Roberts built up some face recognition with regular appearances in the sitcoms "Mary Hartman Mary Hartman" (syndicated, 1976-77) and "Angie" (ABC, 1979-1980) but truly came into her own as a widely known comedienne in 1995 when she was cast as the meddling, strong-willed family matriarch on "Everybody Loves Raymond" (CBS, 1996-2005). The show became of the best-loved sitcoms in history, and Roberts earned seven Emmy nominations and four wins for her colorful characterization. Well past the common age of retirement and well past the show's celebrated end, Roberts maintained a reputation as one of the big and small screen's most iconic mothers, and she continued to be a welcome sight as a television guest star and film player.

Born in St. Louis to a father whose name she has never revealed and her mother, Ann Meltzer.

She lives in a home once rented by James Dean.

She beat out 100 other actresses for her role, of "Marie Barone", on Everybody Loves Raymond (1996).

Doris's son, Michael Cannata, is her manager. He has three children.

When she was little, Doris's father abandoned her and her mother, which forced her mother Ann to single-handedly raise Doris on her own.

Played Charles Grodin's mother in The Heartbreak Kid (1972), although she is only 10 years older than he is.

Attended the opening night screening of Towards the Moon with Fellini (2006) at the 2006 Beverly Hills Film Festival, where Mikhail Vartanov and Dominique Swain were also present.

She studied drama at HB Studio in Greenwich Village in New York City.

Best known by the public for her roles as Mildred Krebs on Remington Steele (1982) and as Marie Barone on Everybody Loves Raymond (1996).

She appeared in one of the final episodes of Desperate Housewives (2004).

She was originally cast as Vivian in Maude, but the producers thought she was too much like the main star Bea Arthur. After shooting the pilot, she was replaced with Rue McClanahan.

Appeared in every episode of Everybody Loves Raymond (1996).

Was a spokesperson for Glade Products.

Had suffered back problems and broke her herniated disc during filming of Remington Steele (1982).

Her ex-Everybody Loves Raymond (1996) co-star, Ray Romano, along with herself are both benefitting The Peter Boyle Research Fund, to honor Boyle, who died of multiple myeloma in 2006.

Was reunited with ex-Everybody Loves Raymond (1996) co-star, Patricia Heaton, in 3 different episodes of The Middle (2009).

Was the producers' first choice for the older lead role of Marie Barone in Everybody Loves Raymond (1996). At first, she turned it down, due to her busy schedule of the stage, but had no way out with it.

Just before her ex-Everybody Loves Raymond (1996)'s co-star's, Peter Boyle's death, they were both spokespeople for Alka-Seltzer's 75th Anniversary, where Boyle reprised the famous line, "I can't believe I ate that whole thing!".

Began acting as a child.

She was awarded a Star on the Hollywood Walk of Fame at 7021 Hollywood Blvd for Television.

Grandmother of Kelsey, Andrew, and Devon.

Her acting mentor was the late Shirley Booth.

She testified before a U.S. Congressional panel how the entertainment industry has made aging a detriment to hiring. [4 September 2002].

Is active in an organization called the Children Affected by AIDS Foundation.

Her stepfather, whose surname she took as her own, was Chester H. Roberts, whose name is included with Ann and Doris Green in the 1940 census as "lodger". Chester and Ann Roberts operated the Z.L. Rosenfield Agency, a stenographic service catering to playwrights and actors.

Her parents were both from Jewish immigrant families (from Russia). Her father was related to vaudeville performer Henry Lewis.

She serves as honorary event vice-chair for one of the organization's three large-scale annual fundraisers, Dream Halloween L.A., since 1991.

Attended the Neighborhood Playhouse School of the Theatre in New York.

Was pranked on an episode of Candid Camera (1998). Also pranked in the same episode was her Everybody Loves Raymond (1996) co-star, Ray Romano.

Between 1983 and 2004, she received 11 Emmy nominations. She won 5 Emmies for Outstanding Supporting Actress in either a Drama or Comedy series.

Her favorite movie role was Hester Street (1975), a film about turn of the century Russian-Jewish immigrants.

She was an acclaimed Broadway actress.

Is the founder of the Doris Roberts-William Goyen Fellowship in Fiction through the Christopher Isherwood Foundation in 2001. The monetary award is given annually and intended to support writers who have published at least one book of fiction, either a novel or a collection of stories.

Her husband William Goyen was originally from Texas.

Her son Michael Cannata was named after his father, who was her first husband.

With the encouragement of Lily Tomlin, she moved to Los Angeles, California, in 1973, to become an actress.

Played the wife of Peter Boyle on Everybody Loves Raymond (1996). On the show, their characters were supposed to be the same age. In real-life. Roberts was 10 years older than Boyle.

Doris Roberts passed away on April 17, 2016, at the age of 90, the same week wrestler Chyna and singer Prince both died.

Was physically healthy and physically active, until her death at age 90.

4. The Little Rascals Save the Day

1. Are You Hungry, Dear?: Life, Laughs and Lasagna

1. Are You Hungry, Dear?: Life, Laughs and Lasagna

Agent Kermit D. Fonz added this to a list 2 weeks, 2 days ago
Gone, but not forgotten (1469 person items)

"It's a Long Way Back Character: Gladys Pulcher"

Queen of Horror added this to a list 5 years, 12 months ago

moviebuff added this to a list 6 years, 2 months ago
Entertainers Whom We Miss (120 person items)

SwtChaos added this to a list 6 years, 2 months ago

ercer added this to a list 6 years, 2 months ago
Rest in Peace (433 person items)