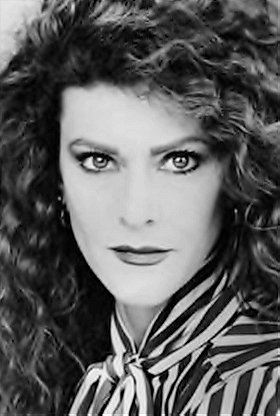 In the infamous cult classic Surf Nazis Must Die (1987), Wildsmith's vivid performance as a sexually-insatiable nut-case won her a special "Guilty Pleasure" Award at the Cannes Film Festival. She also had memorable roles in Evil Spawn (1987), playing scientist John Carradine's evil, sardonic assistant (who helps transform an aging, insecure actress into an insectoid monster), and Hollywood Chainsaw Hookers (1988), as a cackling chainsaw hooker who tries to seduce her way out of doing prison time. In the latter, she also designed the makeup that adorns cult queen Linnea Quigley's body during her notorious "Virgin Dance of the Double Chainsaws." Possibly the best and most memorable performance in Dawn's all-too-brief career was playing a trash-talking tough cookie who tries to help David Carradine retrieve his abducted wife in the post apocalyptic action flick Warlords (1988). Other credits include such popular 1980s B flicks as The Phantom Empire (1988), Beverly Hills Vamp (1989) and Wizards of the Demon Sword (1991). She also appeared briefly in Mohammed Rustam's awful alien-vampire opus Evils of the Night (1985) and had an uncredited bit as a club dancer in Larry Cohen's fun killer mutant baby sequel It's Alive III: Island of the Alive (1987).

Dawn received a "Drive In Academy Award" nomination from John Bloom for her performance in Warlords (1988), was voted "Most Working Actress" in Variety magazine that same year and received a Playboy Magazine pictorial proclaiming her "Queen of the B's" a year later. Sadly, at the height of her fame as a B-movie force to be reckoned with, Dawn abruptly left the business and hasn't appeared in another film since the early 1990s. In fact, her last credited appearance in Steve Latshaw's Jack-O (1995) is actually just recycled footage that was filmed in the late 1980s. Said footage was shot to try to entice producers into backing another project called Teenage Exorcist (1991). That project was eventually filmed in 1991, but the role was recast with Brinke Stevens in the lead. As of 2001, Dawn resided in Ashland, Oregon, and was traveling around the country exhibiting her surrealist artwork. ... (more) (less)
Tags: American (1)
My tags: