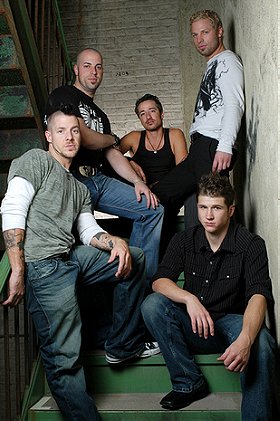 7 votes
Artists So Detestable, Why Do They Exist? (14 items)
list by alessandrom
Published 4 years, 1 month ago

5 votes
Only People I'd ever allow on my Ipod (51 items)
list by Khiarahana
Published 8 years, 5 months ago

Daughtry is the debut album of the American rock band of the same name, the band formed and fronted by American Idol season five finalist Chris Daughtry. The album is the fastest selling debut rock album in Soundscan history.
"It's Not Over" lead the album release, and proved to be a success, reaching the top five on multiple charts, including the U.S. Billboard Hot 100 where it peaked at number four.
The next single "Home" joined "It's Not Over" on the Billboard Hot 100, peaking at number five and making Daughtry the first debut album by an Idol contestant to contain two top five Hot 100 singles. Meanwhile, "What I Want" was released as the second single (the third overall) instead of "Home" to rock stations, and reached the top ten on Mainstream Rock, peaking at #6.
The band's fourth single, "Over You" was released to Top 40 and Hot AC radio on July 24, 2007, peaking in the top twenty of the Hot 100. "Crashed" (the fifth overall single), was released in place of "Over You" on rock stations on September 10, 2007.
The sixth single from the album, "Feels Like Tonight", was released on January 8, 2008. The song became a top forty Hot 100 hit for the band, peaking at #24. The seventh and final single, "What About Now", was released on July 1, 2008. However, the song reached the top twenty of the Hot 100 over two months before its release, making it the band's fourth top twenty hit off the album on the chart.

alessandrom added this to a list 4 years, 1 month ago

"See Nickelback, but add American Idol. Would also like to mention that they market themselves as a hard rock band, but sing glorified sleazy Muzak (but with loud guitars!) https://www.youtube.com/watch?v=7bnX-6sJZBw"