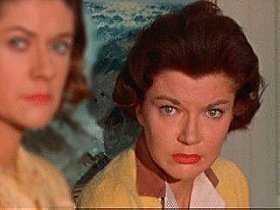 The world famous Madame Tussaud's honored Darlene by selecting Sally Spectra as the only soap opera character to be displayed in their gallery of wax figures in Amsterdam and Las Vegas. "The character of Sally is the epitome of a certain type of female who is no better than they should be," says Darlene, who has played a distinguished line of shady ladies. "Sally has been in the gutter, but she is looking at the stars and will stop at nothing to bring Spectra Creations up to the level of Forrester Creations. She's a tough dame with a heart, lovingly created and crafted in the tradition of those wonderful 'gal characters' in the films of the 1940's and 50's."

Darlene's career has been highlighted by a series of artistic relationships with some of the seminal artists in the entertainment medium. Born of Irish-German heritage and raised on Chicago's South Side, Darlene was discovered at age 15 by legendary Broadway impresario Jed Harris who cast her as the Irish maid in a touring production of the 19th century melodrama The Heiress, which starred Basil Rathbone. After graduating high school, she toured the country with classical theater companies before appearing in Shakespearean roles on Broadway with the Helen Hayes Repertory Theater. She later appeared in a Broadway revival of The Night of the Iguana, with Richard Chamberlain, and in David Merrick's musical The Baker's Wife. In Los Angeles, she has appeared in Cyrano de Bergerac and The Night of the Iguana (both with Chamberlain), in The Time of the Cuckoo with Jean Stapleton and Ring Around the Moon with Michael York.

Alfred Hitchcock cast Darlene in her first feature film The Birds, and she worked with John Cassavetes in Faces and Minnie & Moscowitz. She was also seen in The Valley of the Dolls, Play It As It Lays and Lady Sings the Blues as well as Tough Guys, with Burt Lancaster and Kirk Douglas.

Darlene's television career has been split between prime time, where she has appeared in a host of television motion pictures, mini-series and all of the vintage dramatic series, and daytime television, a medium where she has developed a range of memorable characters on continuing drama serials. She appeared in the mini-series Robert Kennedy & His Times and in the television motion pictures The Fighter, The Choice, Return Engagement and The President's Plane is Missing, among others. She has made dozens of guest starring appearances on such episodic dramas as The Cosby Show, Murder, She Wrote, Cagney & Lacey, Little House on the Prairie, The Mary Tyler Moore Show and Highway to Heaven.

Daytime audiences remember Darlene for her portrayal of the nefarious Rose DeVille on The Young and The Restless, Edith Baker on Days of Our Lives, Louie on Capitol and Trixie Monahan on General Hospital. Darlene is a big enthusiast for the opportunities which daytime offers actresses. "It's really the best medium today for women of a certain age to do something really flashy...it's where what we do really well matters," she notes.

One element of Sally Spectra's character, which showcases Darlene's dramatic range and abilities, is the character's propensity to portray an exotic repertoire of offbeat, flamboyant characters. Thus far, Darlene (as Sally) has been disguised as Mae West, Beau Rivage (a male French fashion designer), a Louise Brooks-type German spy, an Italian gigolo, a Madonna, and a German Countess.

Darlene is currently enjoying success as a recording artist. She released a single in Europe and has performed in a string of concerts in Holland and Finland.

Currently single, Darlene has raised one son and two stepsons. She celebrates her birthday on July 18. ... (more) (less)
My tags: