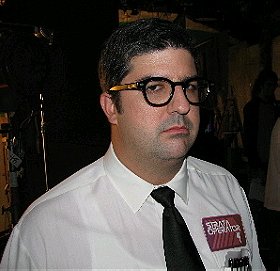 Snyder was born in Allentown, Pennsylvania on November 14, 1973 and grew up in Las Vegas, Nevada. He credits Don Rickles, Rip Taylor, and Phil Silvers as childhood influences. Snyder graduated from Las Vegas High School in 1992 and he graduated with a BFA from the Conservatory of Theatre Arts at Webster University, Missouri in 1996.

Snyder was hired to voice Master Shake on Aqua Teen Hunger Force, without auditioning, based solely on his speaking voice during a phone call to Dave Willis. Snyder also provided the voice of Gazpacho on Chowder, Todd and Benny Lee on the G4TV show Code Monkeys, "The Alchemist" on The Venture Bros., and Granny Cuyler on Squidbillies. He also voices Leonard the Koala in The Penguins of Madagascar and plays a teacher named "Mr. Baldwin" on the Disney series Fish Hooks. He played Alistair in Open Season 3. Snyder provided the voices of Sam as well as Cold Fusion Reactor Dad on the web series Suicide by Side. He also narrated the Adult Swim web series Sipes Stories that he co-produced with Andy Sipes. He has also starred on Adventure Time as The Wizard from the episode "Little Dude" in the fifth season. He also played the voice of Belcitane within the White Knight Chronicles, and the White Knight Chronicles II.

In June 2010, he appeared as Max Bialystock in the Lyceum Theatre's production of Mel Brooks' The Producers in Arrow Rock, Missouri.

In February and March 2011, he again played Max Bialystock in The Producers at the Riverside Theatre in Vero Beach Florida.

Snyder has also been seen in the Lyceum Theatre 2011 productions of Run For Your Wife, Damn Yankees, and The Sound of Music and has worked at several other United States regional theaters, including Repertory Theatre of St. Louis, Cincinnati Playhouse in the Park, and Cleveland Play House.

Snyder was also a guest performer during several performances of the Atlanta-based burlesque revue "Dames Aflame" in 2010 and 2012.

Snyder has made guest appearances on ER, Brothers and Sisters, and Gary Unmarried.

Dana Snyder also appeared in Saul of the Mole Men, The Young Person's Guide to History, and Your Pretty Face is Going to Hell.

Snyder co-hosts the Ken P.D. Snydecast with Ken "Plumey" Plume, which is a free podcast produced out of Plume's Fred Entertainment.

The show originally followed a "weekly" episode distribution but has been more sporadic in later years.

2. The Ghost and Molly McGee

5. Hell and Back
View all Dana Snyder movies (2 more)

3. Scooby-Doo! and the Gourmet Ghost