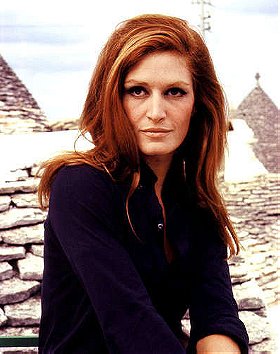 3 votes
We Lost them. (11 items)
list by Cleopatra
Published 6 years, 1 month ago

In 1950, Dalida participated in the Miss Ondine beauty pageant and won the title, and shortly after began working as a model for Donna, a Cairo-based fashion house. In 1954, at the age of 20, Dalida competed in and won the Miss Egypt pageant, and was crowned Miss Egypt.[5] It was then that she was spotted by French director Marc de Gastyne and, much to the reluctance of her parents, she moved to Paris on Christmas Eve of the same year with the intention of pursuing a career in motion pictures. It was about this time she adopted the name Dalila, which was shortly thereafter changed to the more familiar Dalida.

Dalida performed and recorded in more than 10 languages including: French, Italian, Arabic, German, Spanish, English, Dutch, Japanese, Hebrew, and Greek. She collected 19 number one hit singles to her name in four languages (French, Italian, German, and Arabic) and has a long list of top 10, and top 20 hits in French, Italian, German, Spanish, and Arabic, and accumulated myriad top selling singles and albums largely, in France, Italy, Germany, Belgium, Spain, the Netherlands, Luxembourg, Switzerland, Austria, Egypt, Jordan, Lebanon, Greece, Canada, Russia, Japan, and Israel, spanning over forty years. Four of Dalida's English language recordings ("Alabama Song", "Money Money", "Let Me Dance Tonight", and "Kalimba de Luna"), gained moderate success primarily in France and Germany, without being widely distributed in the UK and US markets. Worldwide sales of her music are estimated at over 130 million, establishing her as one of the most noteworthy multi-lingual recording artists of the 20th century.

Dalida's mother tongue was Italian. She learned Egyptian Arabic growing up in Cairo, and acquired fluency in French after establishing herself in Paris in 1954. She later achieved command of the English language as well as reasonable conversational skills in German and Spanish. Dalida also had the aptitude of greeting her fans in basic Japanese. ... (more) (less)
Tags: French (1), Italian (1), Suicide (1), Egyptian (1), Singer (1), Deceased (1), Born 1933 (1), Died 1987 (1)
My tags:

1. With Love: The Best of Dalida

1. With Love: The Best of Dalida

Georgini voted for 2 images 4 weeks ago

Palermo Sicily voted for an image 2 months, 2 weeks ago

Kendraatje voted for an image 2 years, 8 months ago

powerking14 voted for 2 images 3 years ago

Campagnola posted a image 3 years ago

Minerva13 voted for an image 5 years ago

sahe voted for an image 5 years, 6 months ago

giannicorso73 voted for an image 5 years, 6 months ago

rickterenzi voted for 63 images [View All] 5 years, 8 months ago