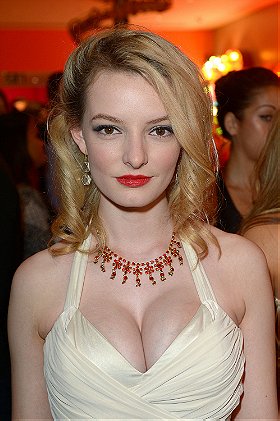 242 votes
Most Beautiful Women in the World...Today! (1755 items)
list by Avid Admirer
Published 7 years, 5 months ago

Richards was born in South Kensington, London, She was named Dakota Blue because her mother wanted a combination of a place-name and a colour.

The family moved to Sussex shortly after Dakota was born. At school she took very few drama classes and she was not an active participant in class assemblies or school plays. She missed out on the part of Mary in the nativity play.She had always enjoyed acting, but considered it "just a fun little hobby thing" and "never really thought [she]'d get into doing it professionally".

When she was nine years old, Richards had the His Dark Materials books read to her by her mother, feeling that she could "be her".After she saw the stage adaption at the National Theatre, she says she "just wanted to be Lyra".She received private tutoring from two individual tutors on set,she noted, "I think I actually improved academically from being privately tutored."

Philip Pullman, author of the books, said that, "As soon as I saw Dakota's screen test, I realised that the search was over." Chris Weitz, the director, added that Richards "made what should have been an extremely difficult decision quite easy." The film was released worldwide in December 2007. Richards' portrayal in the film was variously described as "efficient","a decent job","nicely played" and "enchanting";one review called her "terrific casting".Peter Bradshaw of the Guardian commented that; "Lyra is nicely played by 13-year-old newcomer Dakota Blue Richards, though with an Artful Dodger-ish "urchin" accent that comes and goes a bit" and that she "struggles with lumpy dialogue".Pulitzer Prize-winning critic Roger Ebert was more effusive, calling Richards "a delightful find" who was "pretty, plucky, forceful, self-possessed, charismatic and just about plausible as the mistress of an armoured bear and the protector of Dust." ... (more) (less)
Tags: British (14), Actress (11), Cute (8), Stunning (8), Beautiful (8), Gorgeous (8), Stunner (7), Hot (7), Breathtaking (6), Blonde (5), Model (5), Redhead (4), Buxom (3), Child Actor (3), Pretty (3), 1994 (3), Pale (3), English (3), Skins (2)
My tags:

jonslist voted for an image 3 weeks, 2 days ago

jemate voted for an image 1 month, 1 week ago

octavium voted for an image 2 months, 3 weeks ago

looksharp voted for an image 2 months, 3 weeks ago

ROADKILL41 voted for 3 images 5 months ago

psow voted for an image 5 months, 1 week ago

shumsimpson voted for an image 6 months, 3 weeks ago

Emmabell voted for 2 images 7 months ago

Look Left voted for an image 7 months, 3 weeks ago

fuskator voted for an image 8 months ago

jonslist voted for an image 8 months, 3 weeks ago

jonslist voted for an image 9 months ago