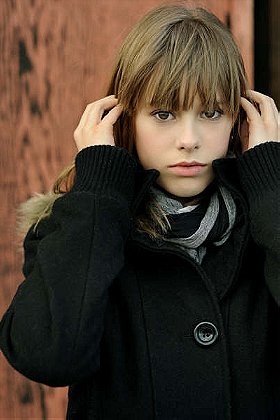 46 votes
The Many Women of Supernatural (362 items)
list by KatsyKarma
Published 6 years, 8 months ago

Campbell was born in Vancouver, British Columbia. She is fluent in both Polish and English, as her mother is Polish and her father is Spanish American. She is trained in both Ballet and Jazz.

Campbell's career started with acting in television commercials at a young age.

Campbell made two guest appearances on CTV's hit show, Cold Squad. She starred in Wilder Days with Peter Falk and Tim Daly in 2003.

She is known for her role as Maia Rutledge-Skouris on the USA channel miniseries and show, The 4400 (2004–2007). There she portrays a returned 'child abductee' who's been missing for decades. When 'returned', she is un-aged and imbued with the psychic ability to foretell the future.

4. Sitting on the Edge of Marlene (2014)
View all Conchita Campbell movies

Magdalena added this to a list 1 year, 4 months ago
Actresses (387 person items)

Peco added this to a list 2 years, 4 months ago
Canadienses (156 person items)