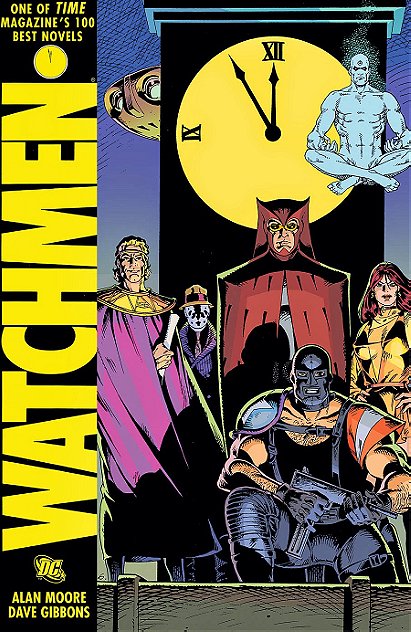 View all Watchmen pictures
Watchmen is Alan Moore's seminal comic series. It has been proclaimed one of the greatest literary works ever created and was the only comic book to be featured in Time Magazine's best 100 English-Language novels from 1923 to present.

"Who watches the Watchmen?" This slogan was everywhere: on the Universal Product Code box of direct market comics; adorning the bottoms of letter columns, and in provocative full page house ads. DC knew it had its hands on something truly great, and it wanted to whet the appetite of as many fans as it possibly could. When the first part of the 12 issue maxi series, "Watchmen" hit the stands, readers weren't quite sure what they were going to get. But when word of mouth began to spread about both the quality of Alan Moore's scripting and Dave Gibbons' detailed drawings, "Watchmen" became a fast seller and a fan favorite.

The writer had originally intended for his opus to chronicle the future of the fondly remembered heroes from the defunct publisher Charlton Comics. However, DC soon decided it had its own plans for those heroes and so Moore created new characters to give "Watchmen" its own distinctive universe. The story itself is a masterful example of comic book storytelling at its finest. As the obsessive Rorscharch began to investigate the murder of his old teammate the Comedian, a mysterious conspiracy unraveled that both saved the world and damned it. Filled with symbolism, foreshadowing and ahead-of -its-time characterization thanks to adult themes and sophisticated plotting, "Watchmen" elevated the super hero comic book into the realms of modern literature.

everevertz rated this 8/10 2 months ago

magicweve added this to want to read list 3 months, 1 week ago

venomu added this to a list 1 year, 1 month ago
Cartoons Favoritos (18 tv items)

glencomic added this to Read list 1 year, 2 months ago

GigaBeer added this to a list 1 year, 5 months ago

Martínez 06 posted a image 2 years ago

mortred added this to Read list 2 years, 6 months ago

alphaguy added this to want to read list 3 years, 3 months ago

PCA added this to a list 3 years, 10 months ago
Reading comics. (63 comicbooks items)

hellekinstu added this to a list 3 years, 11 months ago
Comics (19 comicbooks items)