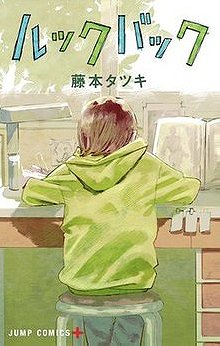 View all Look Back (Manga) pictures
Fourth-grader Ayumu Fujino regularly draws four-panel manga for her school newspaper and is lauded as having the best artwork in her class. One day, she is asked by her teacher to turn over one of her manga slots in the school newspaper to a truant student named Kyomoto. When Kyomoto's manga pops up alongside Fujino's, it receives high praises for its detailed artwork, making Fujino furiously jealous.

Refusing to be beaten by someone who barely attends school, Fujino devotes herself to learning to create manga. As time goes on though, her goal of outshining Kyomoto seems to only get further and further away, and Fujino, now in sixth grade, eventually gives up and quits making manga.

Graduation day arrives, and Fujino is asked to deliver Kyomoto's graduation certificate to her. Through chance, the two end up coming face to face, and their unexpected meeting will end up having consequences far beyond what either of them could ever predict.

ShinseD4C posted a image 2 months ago