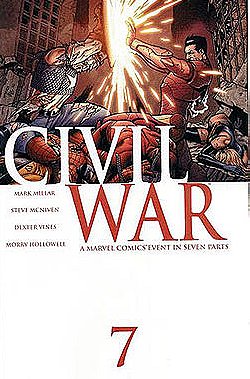 View all Civil War pictures
"Civil War" is a 2006–2007 Marvel Comics crossover storyline built around a seven-issue limited series of the same name written by Mark Millar and penciled by Steve McNiven, which ran through various other titles published by Marvel at the time. The storyline builds upon the events that developed in previous Marvel crossovers, particularly "Avengers Disassembled", "House of M", "Decimation", and "Silent War". The tagline for the series is "Whose Side Are You On?"[1]

The plot of the series follows a framework storyline in which the U.S. government passes a Superhero Registration Act ostensibly designed to have superpowered characters act under official regulation, somewhat akin to police officers. However, those opposed to the act, led by Captain America, find themselves in conflict with those in support of the act, led by Iron Man, with Spider-Man caught in the middle. The events of the series touch upon themes of liberty, moral responsibility, and civil order, with well-intentioned superhero characters finding themselves upon different sides. The series received polarizing reviews but was a commercial success, spawning many media adaptations.

Zenosyne added this to want to read list 4 years, 2 months ago