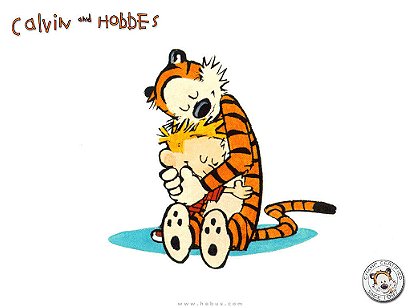 View all Calvin and Hobbes pictures
Calvin and Hobbes is a daily comic strip that was written and illustrated by American cartoonist Bill Watterson, and syndicated from November 18, 1985, to December 31, 1995. It follows the humorous antics of Calvin, a precocious, mischievous, and adventurous six-year-old boy, and Hobbes, his sardonic stuffed tiger. The pair are named after John Calvin, a 16th-century French Reformation theologian, and Thomas Hobbes, a 17th-century English political philosopher. At the height of its popularity, Calvin and Hobbes was featured in over 2,400 newspapers worldwide; as of January 2010, reruns of the strip still appear in more than 50 countries. Nearly 45 million copies of the 18 Calvin and Hobbes books have been sold.

Calvin and Hobbes is set in the contemporary United States in an unspecified suburban area. The strip depicts Calvin's flights of fantasy and his friendship with Hobbes, and also examines Calvin's relationships with family and classmates. Hobbes' dual nature is a defining motif for the strip: To Calvin, Hobbes is a live anthropomorphic tiger; all the other characters see him as an inanimate stuffed toy. Though the series does not mention specific political figures or current events, it does explore broad issues like environmentalism, public education, philosophical quandaries, and the flaws of opinion polls.

napier added this to want to read list 1 year, 10 months ago

Bernd Richthoff added this to Read list 2 years, 3 months ago

johanlefourbe rated this 9/10 2 years, 9 months ago

lanube added this to want to read list 4 years, 1 month ago

RobJ81 added this to Read list 5 years, 8 months ago