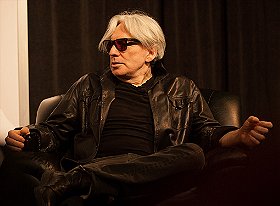 View all Chris Stein pictures
Christopher Stein (born January 5, 1950) is the co-founder and guitarist of the new wave band Blondie. He is also a producer and performer for the classic soundtrack of the hip hop film, Wild Style, and writer of the soundtrack for the film Union City. He is also an accomplished photographer.
Tags: American (1), Musician (1)
My tags:

1. Making Tracks: The Rise Of Blondie

1. Making Tracks: The Rise Of Blondie