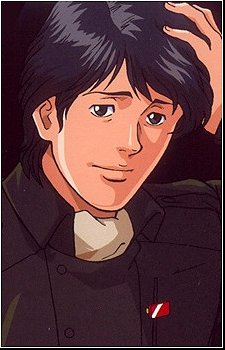 Yang Wenli is a commodore, currently serving in the 2nd fleet of the Free Planets Alliance.

The son of a merchant and a pacifist at heart, Yang never wanted to be a soldier; his dream was to become a historian, but he didn't have the money to pay for his tuition and joined the army to get a scholarship. He barely made it through the officer's academy due to his lack of interest, though he did make a number of friends there including Dusty Attenborough and Jean Robert Lap. He also met music student Jessica Edwards and both him and Lap developed a crush on her, Jessica eventually chose Lap, Yang accepted her decision and they remained friends.

Soon after he graduated, Yang became involved in a battle near the friendly planet El Facil, because of his superiors' incompetence and cowardice, the planet was abandoned while a hostile imperial fleet was on its way. Yang was one of the few officers that remained behind and tried to help the population, thanks to his efforts the planet was evacuated in time. Because of this achievement he became famous as "the hero of El Facil" and "miracle Yang," forever earning the envy of his peers and the scorn of his superiors.

It was at El Facil that Yang first became interested in tactics, but ever since that incident and although he kept rising through the ranks, his novel tactical suggestions were being arbitrarily rejected by hostile superiors. Though disappointed and increasingly cynical with the state of affairs in the Alliance, Yang never stopped trying to do at least the absolute minimum to justify his salary and the pension he was so looking forward to.

Miracle Yang, also called "the magician," is a genius tactician, as well as a competent strategist. Unlike his often proud adversaries, Yang is more than willing to resort to trickery and his only flaw as a commander lies with his inability to go against the orders of his superiors. Yang holds democracy in an extremely high esteem and has a well-defined political philosophy, providing much insight to anyone willing to listen to him. In his personal life he appears to be quite slothful, he is notoriously incompetent with house chores, as well as in all things romantic. After serving on the Patorokolos in the start of the series, Yang eventually gets the battleship Hyperion as he his given command of the 13th fleet, and this becomes his flagship during the coming conflic­ts.

Your Rating:
Tags: Legend Of The Galactic Heroes (1)
My tags:

Magnific added this to a list 2 months, 2 weeks ago
Favorite Characters (239 characters items)

MerryKurisuma rated this 9/10 8 months, 1 week ago

Delgora added this to a list 1 year, 5 months ago
Favorite Characters (52 characters items)

WillChangeTomorrow rated this 10/10 2 years, 3 months ago

Leonxz added this to a list 4 years, 11 months ago
Favorite Characters (38 characters items)

unklarheit added this to a list 5 years, 9 months ago
Favorite Characters (8 characters items)