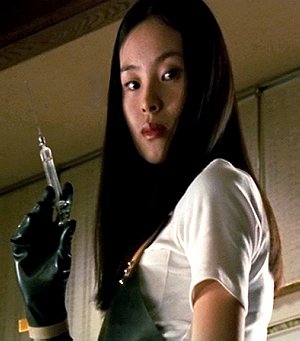 View all Yamazaki Asami pictures (1 more)
Yamazaki Asami is the main antagonist of the Japanese horror film "Audition" - which was released in 1999 and is still considered by many to be one of the more disturbing and graphic "J-horrors", it is also quite controversial due to its content and theme.
Yamazaki Asami is portrayed as a deeply disturbed woman who suffered at the hands of child-molestation, causing her to seek vengeance but also making her lose touch with reality and become murderously insane as a result.