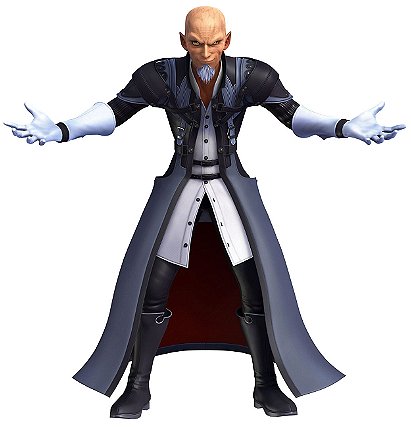 View all Xehanort pictures
Xehanort is a major character in the Kingdom Hearts series, and is the central antagonist of the Dark Seeker Saga.

A Keyblade Master who once taught Ventus, Master Xehanort believes that darkness and light should exist in perfect balance, and for this reason, he seeks to conquer Kingdom Hearts and recreate the worlds according to his wishes. Through his many different incarnations, including Terra-Xehanort, his Heartless, Ansem, Seeker of Darkness, and his Nobody, Xemnas, Xehanort is ultimately responsible for the series of events that repeatedly threaten the worlds with destruction, including the mass release of Heartless into the Realm of Light, and the creation of the Nobodies and Organization XIII. He has also brought tragedy to many that have crossed his path, including Sora, Riku, Kairi, Terra, Ventus, and Aqua.

Like the members of the original Organization XIII, Xehanort's name contains the letter "X", along with the anagrams "Another" and "No Heart". According to Tetsuya Nomura, Young Xehanort is approximately 18 to 20 years old, while Master Xehanort is in his mid-80s.