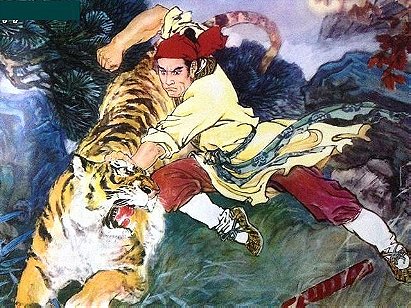 1 vote
View all Wu Song pictures
Wu Song (Chinese: 武松; pinyin: wǔ sōng), also known as Wu the Second (武二郎; wŭ èrláng), is one of the well-known characters in Water Margin, one of the Four Great Classical Novels in Chinese literature. Nicknamed "Pilgrim", he ranks 14th among the 36 Heavenly Spirits of the 108 Stars of Destiny. In folk tales derived from the novel, Wu Song is a martial arts student of Zhou Tong and specialises in Chuojiao. In the novel he fights well with bang (quarterstaff) or a pair of broadswords.

A native of Qinghe County (in present-day Xingtai, Hebei), Wu Song is tall and good-looking with shining eyes, thick eyebrows, a muscular build and an impressive bearing. His parents having died early, he was raised by his dwarfish elder brother Wu Dalang (武大郎; literally "Wu the Older"), whom he respects and cares very much about.

shotswerefired rated this 7/10 2 months, 2 weeks ago

Kandi voted for an image 2 months, 2 weeks ago