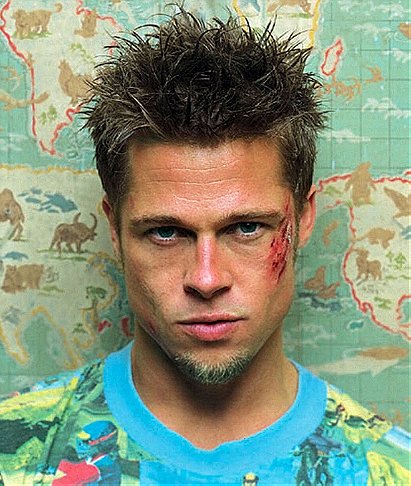 1 vote
View all Tyler Durden pictures (28 more)
From Fight-Club film.
A split personality created by The Narrator's insomnia induced insanity. Tyler fully manifests himself as a separate personality after Marla Singer begins appearing at The Narrator's support groups because Tyler and the Narrator both liked Marla, but only Tyler would admit it. Tyler represents everything the narrator wants, but wont act on: Neo-Luddism, Anarcho-primitivism, and Nihilism, and a strong hatred for consumer culture. In addition to Tyler's beliefs, the Narrator also admires his looks and charisma. Tyler has night jobs to first fill his time and leave problems to be used as black mail against the companies later. He also makes soap which is one of his sources of materials for the bombs he knows how to make. He and the Narrator started Fight Club, but Tyler continued it with Project Mayhem. Tyler uses Project Mayhem to make various attacks on consumerism and normal social order. He frequently describes (and acts on) his opposition to popular culture, materialism, capitalism, most technology and social order. He describes his ideal world as an Arcadian paradise, in post-apocalyptic urban ruins.

In the novel, it could be said there are homosexual undertones between Tyler and the Narrator.

Schizoidsudaca rated this 7/10 3 weeks, 4 days ago

crazymetalhead added this to a list 1 year, 8 months ago
666GreatestFictionalVillains in abc order (2021) (601 characters items)

WillChangeTomorrow rated this 8/10 1 year, 9 months ago

Walter-Blake added this to a list 3 years, 6 months ago
Villanos Favoritos (19 characters items)

raskolnikovv rated this 8/10 3 years, 7 months ago

thedrillmoney rated this 9/10 4 years, 6 months ago