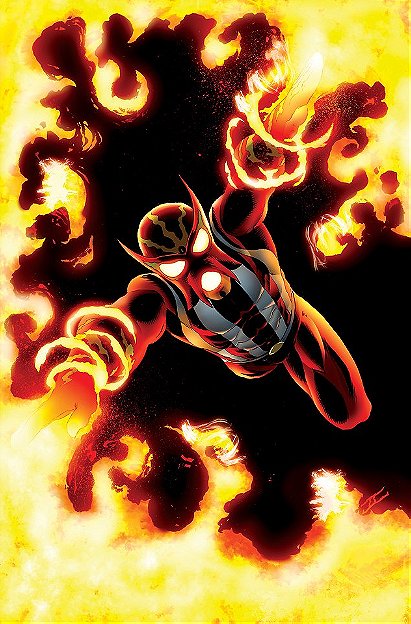 View all Sunfire pictures (4 more)
Sunfire was Japan's premier superhero, a mutant who converts solar radiation into plasma. After getting possessed by Apocalypse, he was stripped of his glory, and now is serving as a member of the Avengers.
Shiro's mother died out of radiation poisoning when he was still a young child. Shiro (吉田 四郎 Yoshida Shirō) was raised by his uncle Tomo to hate the West and seek for a return to Japan's imperial days.
After years of training, Sunfire, wearing a costume that looked like a rising sun, attacked America when the X-Men intervened. The battle ended with Sunfire killing his uncle and returning to Japan.

Leader Vladimir added this to a list 4 years, 11 months ago

"Series: Marvel Universe Votes: 10 Shiro Yashida is a mutant solar reactor and a hothead with a fiery temper that gets him into trouble more often than not. Although somewhat stereotypical of a character of Japanese origin (he obviously also knows several martial arts and hangs with the Yakuza), it does usually land him on the side of the angels. Sunfire's powers have fluctuated over the years from his signature solar fired plasma generation to image-inducing flares as Apocalypse’s Horseman, F"

Nikki added this to a list 5 years, 2 months ago
Asian Superheroes (18 characters items)