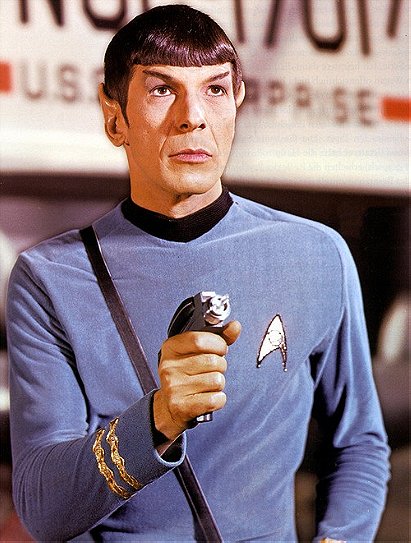 Spock – full name generally considered unpronounceable to Humans – was a Human/Vulcan hybrid who became one of the most distinguished and respected figures in the United Federation of Planets in his lifetime.

As a Starfleet officer in the latter half of the 23rd century, he served aboard the starship USS Enterprise as science officer under Captain Christopher Pike, as first officer and science officer under Captain James T. Kirk, and as the Enterprise's commanding officer during her tenure as a training vessel. In the 24th century, Spock became a celebrated ambassador and adviser to the Federation's leadership.

He disappeared in 2387 after saving the Federation from a supernova that destroyed Romulus and caused the creation of an alternate reality.

valgard added this to Rated list 3 weeks, 4 days ago

Magnfcent added this to Rated list 1 month, 2 weeks ago

mightbedragons rated this 10/10 7 months ago

Nikki added this to a list 3 years, 1 month ago

Kraven added this to a list 3 years, 10 months ago

bandofsisters rated this 8/10 4 years, 3 months ago

Lena voted for an image 4 years, 5 months ago

deadgirlrising rated this 8/10 4 years, 5 months ago