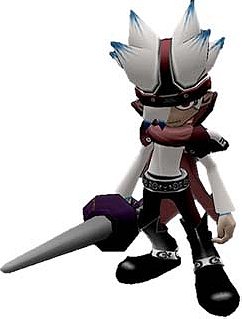 View all Specter pictures
Specter is the main antagonist of the Ape Escape series and the focus of all the main series' games. He is an albino monkey that used to perform in a juggling act during his stay at Monkey Park.

In the events of Ape Escape, Specter accidentally obtained an experimental helmet that boosted his intelligence. He freed the rest of the apes from the amusement park and used the Time Station made by the Professor to travel back in time.

Although he was defeated, Specter quickly took any chances he got to retry world domination in various ways, either through mass mind control or chopping the Earth in half. He is best known for his advanced Peak Point Helmet that he created himself off of the original model, giving him psychic powers, and his mechanized floating throne that he is rarely seen without.