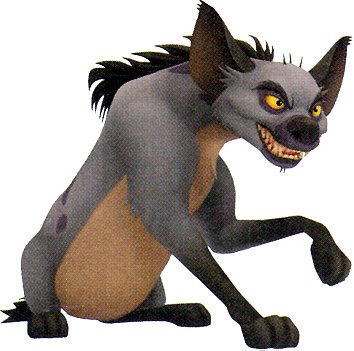 View all Banzai pictures
Banzai is of a trio of spotted hyenas who first appeared as the secondary antagonists of Disney's 1994 animated film, The Lion King. They are the loyal followers and minions of Scar.

While accused of being idiots, the hyenas display a degree of competence rarely associated with comic-relief lackeys, generally foiled by their adversaries' own luck. They corner Simba (foiled only by Mufasa's unexpected rescue), successfully drive the stampede into the gorge, and would have captured Simba had he not escaped through the thorn bushes through which they were too large to pass.

Scar has an extremely low opinion of them, considering them to be stupid and incompetent - but still cared for them by regularly providing food for them prior to allowing them and the rest of the hyena's into the Pride Lands to gain hunting rights and eventually more to scavenge. Also, without them, he would never have risen to become king of the Pride Lands.