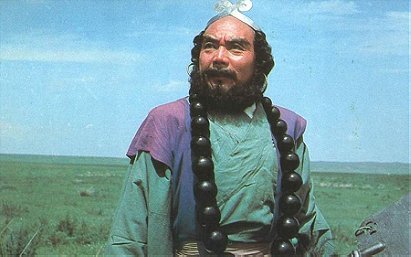 1 vote
View all Sha Wujing pictures
Sha Wujing (in Chinese: 沙悟淨), also known as Sha Heshang (in Chinese: 沙和尚, the "sand priest"), is one of the main protagonists in the 1592 Chinese classic novel Journey to the West by the late Wu Cheng'en, and its multiple adaptations. He is the one who carries the luggages for all Xuanzang's party.

In the classic 1986 series, he was portrayed by the late Yan Huaili in season 1 and Liu Dagang in season 2.

Wujing was once a celestial Curtain Lifting General, who stood in attendance by the imperial chariot in the Hall of Miraculous Mist. He was exiled to the mortal world and made to look like a monster because he accidentally smashed a crystal goblet belonging to the Queen Mother of the West during a Peach Banquet. The now-hideous immortal took up residence in the Flowing Sands River, terrorising surrounding villages and travellers trying to cross the river. However, he was subdued by Sun Wukong and Zhu Bajie when Tang Sanzang's party came across him. They consequently took him in, as part of the pilgrimage to the West.

As the third disciple, even though his fighting skills are not as great as that of Wukong or Bajie, he is still a great warrior protecting Tang Sanzang and can use his intellect as well as his strength to beat the enemy. He knows only 18 forms of transformation and admits this as reported in the middle of the narrative. He is also highly effective in combat underwater.

Wujing is known to be the most obedient, logical, and polite of the three disciples, and always takes care of his master, seldom engaging in the bickering of his fellow disciples. He has no major faults nor any extraordinary characteristics. Perhaps this is why he is sometimes seen as a minor character. He does however serve as the peacekeeper of the group mediating between Wukong and Bajie and even Tang Sanzang and the others. He is also the person whom Tang Sanzang consults when faced with difficult decisions.

Wujing eventually becomes an arhat at the end of the journey for his services, titled Golden-bodied Arhat (in Chinese:金身罗汉), thus giving him a higher level of exaltation than Zhu Bajie, who is relegated to cleaning every altar at every Buddhist temple for eternity, but lower spiritually than Sun Wukong or Tang Sanzang, who are granted Buddhahood.

Kandi voted for 3 images 3 months ago

shotswerefired rated this 7/10 3 months, 2 weeks ago