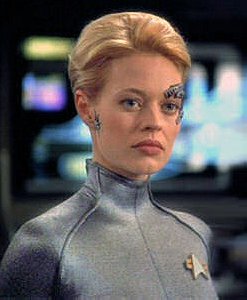 1 vote
View all Seven of Nine pictures (4 more)
Seven of Nine (born Annika Hansen) is a fictional character who appears in seasons four through seven of the American science fiction television series Star Trek: Voyager. Portrayed by Jeri Ryan, she is a former Borg drone who joins the crew of the Federation starship Voyager. Her full Borg designation is Seven of Nine, Tertiary Adjunct of Unimatrix Zero-One. The character was a replacement for Kes (Jennifer Lien), and was intended to introduce a foil to Captain Kathryn Janeway (Kate Mulgrew) in a similar manner as Spock (Leonard Nimoy) in Star Trek: The Original Series.

Seven was introduced in the second part of the episode "Scorpion", the first episode of the fourth season. The character continued to appear throughout the series until the final episode, "Endgame". Stories related to her relationships with Captain Janeway and the Doctor (Robert Picardo) appeared throughout the series, and she was involved in a romantic relationship with Chakotay (Robert Beltran) towards the end of season seven. Several episodes such as "The Raven" explored her background and younger life as Annika Hansen before she was assimilated by the Borg.

Leo added this to a list 1 year, 1 month ago
Most Needlessly Sexualized TV Characters (10 characters items)

Brian G added this to a list 5 years, 3 months ago
Sci-Fi Babe in TV or Film (25 characters items)