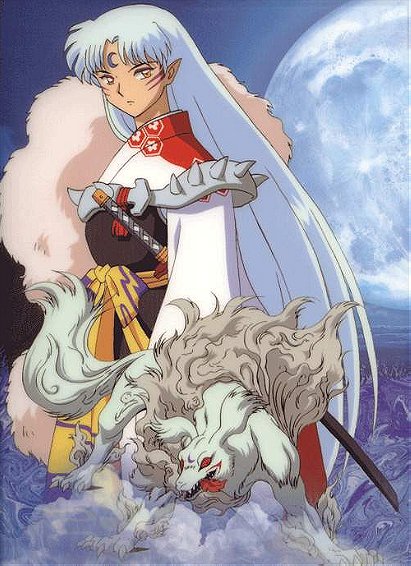 View all Sesshoumaru pictures
Inuyasha's older half-brother. Unlike Inuyasha, Sesshoumaru is a full-blooded dog-demon and is contemptuous of InuYasha for being a half-demon and for consorting with humans. He is a very powerful demon who seems to have no true equal when it comes to raw power; although given the chance in volume twenty-three, he could not defeat Naraku. Although fandom refers to him as the Lord of the Western Lands, this title appears at no point in the manga. Takahashi also stated that Sesshoumaru has no permanent home. Unlike almost every other demon in the world of InuYasha, he has no interest in possessing even one shard of the Shikon Jewel

Sesshoumaru first appears in search of the sword called Tessaiga, created from their father Inu-no-Taisho's fang, which has the power to kill a hundred yōkai with one swing. However, Inu-no-Taisho left Tessaiga to Inuyasha, and Sesshoumaru instead inherited the Tenseiga, a sword which cannot harm the living, but can bring the dead back to life. Inu-no-Taisho did this in the hopes that Sesshoumaru would learn compassion. Considering Tenseiga useless to him, Sesshoumaru battles Inuyasha several times for possession of Tessaiga, and when Tessaiga is broken by a bite from Naraku's incarnation Goshinki, Sesshoumaru has Goshinki's fangs forged into the evil blade Tokijin, which only he is powerful enough to control. Initially, Sesshoumaru is ruthless and cruel in his pursuit of Tessaiga and his dealings with his brother.