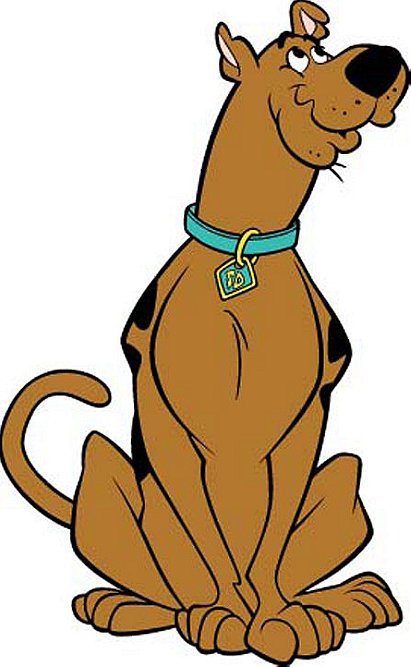 1 vote
View all Scooby-Doo pictures
Scoobert "Scooby" Doo is brown from head to toe with several distinctive black spots on his upper body. He is generally a quadruped, but displays bipedal 'human' characteristics occasionally. Scooby also has opposible thumbs and can use his front paws like hands. He has a black nose and wears an off-yellow, diamond shaped-tagged blue-green collar with an "SD" (his initials) and has four toes on each foot and unlike other dogs, Scooby only has one pad on the sole of each of his feet (so that it was easier to draw in the Scooby-Doo Annuals).

Scooby has a fully prehensile tail he can use to swing from or press buttons. Both his head and tail are malleable and useful as a communication aid or creating a distraction.

Iwao Takamoto later explained that before he designed the character, he first spoke to a Great Dane breeder, who described to him the desirable characteristics of a pedigree dog. Takamoto then drew Scooby as the opposite of this. He said "I decided to go the opposite [way] and gave him a hump back, bowed legs, small chin and such. Even his colour is wrong."

OneSpiderClone rated this 8/10 3 years, 2 months ago

Queen of Horror added this to a list 4 years, 7 months ago
Favorite Fictional Dogs-- (32 characters items)

bandofsisters rated this 8/10 4 years, 8 months ago

Rylvan added this to a list 5 years, 8 months ago
Favorite Characters (441 characters items)