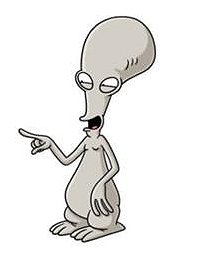 4 votes
Cartoon Characters That Can Never Be Redeemed (14 items)
list by Leo
Published 1 year, 9 months ago

1 vote
View all Roger Smith pictures
Roger is one of the main characters in the animated comedy series American Dad!. He is a space alien whose appearance resembles that of the greys living with the Smith family. Roger is sarcastic, surly, amoral, self-centered, hedonistic, alcoholic, and speaks in swish. Spending his time watching trash TV, eating junk food, doing drugs, and dressing up a variety of personas, Roger is considered to be the breakout character of the show.

Leo added this to a list 1 year, 9 months ago
Cartoon Characters That Can Never Be Redeemed (14 characters items)

Director Black rated this 7/10 6 years ago