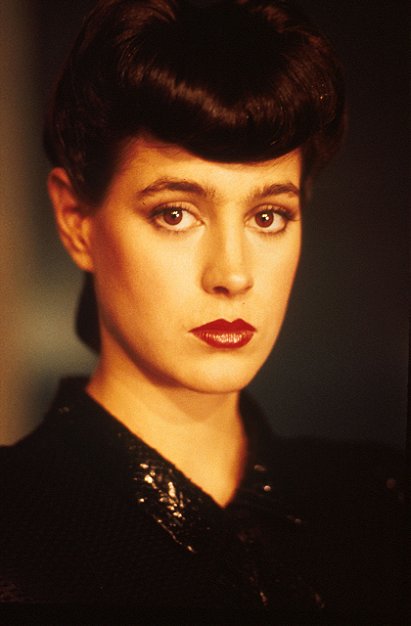 1 vote
View all Rachael pictures (7 more)
Rachael is the latest experiment of Eldon Tyrell. Tyrell believes that as the replicants have such a limited lifespan, they have little time to develop control of their emotions, causing difficulty managing them. He believes implanting them with memories would create a cushion which would allow for emotional development, and make them more controllable.
Rachael has the implanted memories of Tyrell's niece, and she is led to believe that she is human. It is not revealed in the film how long she has been living, but Tyrell admits that he thinks she is beginning to suspect the truth of her existence.
When Rachael learns the truth, she is ignored by Tyrell. In desperation, she turns to Deckard, who has been told by Captain Bryant to retire her. He eventually falls in love with her.
Both of them are allowed to live: Roy saves Deckard from falling off a building, and Gaff does not kill Rachael. Gaff leaves his calling card, an origami model (this time, shaped like a foil unicorn) at Deckard's apartment to show he's been there. At the end of the film, she and Deckard flee from his apartment to go into hiding.
In Blade Runner 2: The Edge of Human, she is kept within a Tyrell transport that slows down her aging process located in an isolated shack outside of Los Angeles. Near the end of the novel, Sarah Tyrell, who is Eldon's niece and Rachael's template, brings her to Tyrell headquarters in order to meet up with Deckard and allowed to flee. However, it is ultimately learned that Rachael is killed by Tyrell agents while Sarah and Deckard escape, allowing Sarah to reclaim her place as Tyrell's niece.
Played by Sean Young.

MerryKurisuma rated this 7/10 1 month, 2 weeks ago

Schizoidsudaca rated this 7/10 5 months, 2 weeks ago

upgradeslinky rated this 5/10 5 years, 1 month ago