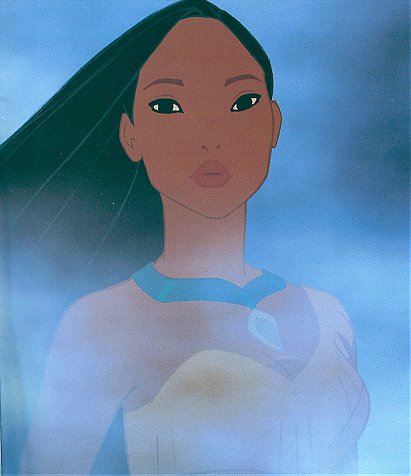 3 votes
View all Pocahontas pictures (14 more)
Pocahontas is a title character in Disney's thirty-third animated feature film Pocahontas, and its direct-to-video sequel Pocahontas II: Journey to a New World. The character and the events she goes through are very loosely based on the actual historical figure Pocahontas.
Pocahontas, as the daughter of a Native American paramount chief, is the first American Disney Princess. Pocahontas is also the first (and only) Disney Princess to have two love interests. However, most media, including the Disney Princess franchise, keep John Smith and Pocahontas as an official couple, completely ignoring John Rolfe. This is generally because Rolfe is exclusive to the direct-to-video sequel.
She is voiced by and modeled after Native American actress Irene Bedard and her singing vocals were performed by Broadway singer Judy Kuhn in both films. Kuhn also reprises the role of Pocahontas in the Disney Princesses' single and music video, "If You Can Dream" and the original Disney Princess songs "These Moments We Share", "Silver and Gold" and "Christmas Is Coming!".

OneSpiderClone rated this 8/10 1 year, 7 months ago

compcua added this to a list 3 years, 1 month ago
Who's the best Pocahontas ? (79 person items)

upgradeslinky rated this 1/10 3 years, 2 months ago

compcua added this to a list 4 years, 3 months ago
Who's the best Pocahontas ? (79 person items)

nostalgia90 added this to a list 4 years, 5 months ago
Characters Based on Real People (80 characters items)